The Achilles Heel of Fundamentalism

The Achilles Heel of Fundamentalism

Fundamentalism never wavered from its original purpose to defend the faith. This was its greatest virtue and the reason for its success in leaving us “better days.” Despite the merits of fundamentalism, however, and its evident success, the movement developed quite a prominent Achilles heel.

As I said at the beginning, fundamentalism was an extremely complex movement. Historians differ on its crystallizing points. There are significant ecclesiastical considerations: its non-denominationalism was a contributing factor. There are also theological considerations: a strong dispensational pre-millennialism played a large part in its growth. Others see the core of fundamentalism forming around educational institutions (schools, colleges, and universities) or mission agencies, conferences, and the many fundamentalist periodicals that came into existence.

It is clear that fundamentalism was never a homogenous movement and it is equally clear that all of the factors mentioned above had their part to play in its growth. But what caused it to grow into the divisive movement that was marked by infighting and schism? What was the impetus of the aggressive isolationism that developed in its ranks when ecclesiastical separation became the preferred method of dealing with secondary issues?

Why did some fundamentalists—more “moderate” in their temperament—distance themselves from the more radical or militant fundamentalists? I’m thinking now of men like J. Gresham Machen, Francis Schaeffer and J. Oliver Buswell, Robert Reymond, and more recently, John MacArthur, Jr. There were also men in England like Martyn Lloyd-Jones and in Northern Ireland, like W. J. Grier. Ian Paisley had been preaching in the Evangelical Presbyterian Church before his ordination. Grier preached Paisley’s ordination sermon in 1946, which interestingly, was not considered constitutionally legitimate by many other Presbyterians. Just a few years later, in the early 1950s Grier actively distanced himself from Ian Paisley and eventually from Carl McIntyre in America also.

I cannot speak for all of these individuals, but it is well-documented history why a distance formed between some of these men despite the fact that they all defended and preached the same gospel and all were opposed to liberalism. By far the most common reason for this distance from fundamentalism was that many moderate men felt that their form of fundamentalism was too bombastic, clamorous, and abrasive, as Lloyd-Jones famously explained to T. T. Shields in Toronto. Some moderates also perceived the fundamentalist leaders to be power-hungry “ecclesiastical adventurers.”

There was also the fact that fundamentalism developed alongside political ideologies both in North America and in Northern Ireland. In North America fundamentalism became closely allied with the politics of the anti-communist movement and the struggle against America’s foreign policy regarding the Soviet Union and China. In Northern Ireland, militant “fighting fundamentalism” developed in connection with the political struggles and the threat of a united Ireland which coincided with an antipathy towards Roman Catholicism. In Canada William Aberhart from Alberta founded the Social Credit Party during the depression of the 1930s, and during WWII T. T. Shields became more political against the Roman Catholic Province of Quebec. Shields’s political aspirations did not come to anything.

These reasons and many more could be given to explain the distance between the “moderate” and “fighting” fundamentalists. But there is a more basic answer to these questions. There was one characteristic that undergirded the whole fundamentalist movement. That characteristic was both its strength and its weakness. It determined how the movement was born, how it developed, and also, how it has ended. It is the “war psychology.”

One historian put it this way: “The distinguishing characteristic that made fundamentalism a unique subset of American evangelicalism in the 1920s was not doctrine but the attitude toward the defense of such doctrine.”

In those early days, emotions were running high. There was an intense feeling of urgency and therefore a definite change of approach. Common sermon titles at this time were “War on Liberalism,” “The Great Gulf Fixed,” and “The Line in the Sand.” In 1925 T. T. Shields, the most prominent Canadian fundamentalist, preached a message in New York entitled “The Necessity of Declaring War on Modernism.”

This “war psychology” was indeed well placed against the liberalism of that day. Remember, this was after forty years of liberals “paltering with words in a double sense.” These words, written by a Chicago “free-thinker” in the early 1920s show that even secular observers could see that liberals expressed their “views about God, Christ, the Bible, and the Church, in language of masterly vagueness and ambiguity.” War on liberalism was indeed necessary.

As the movement gained momentum it developed a mentality of war and a corresponding sense of paranoia. Fundamentalism was more fearful of liberalism than it was confident in its own strength. In this subculture of suspicion many fundamentalists became reactionary and more and more obsessed with preserving their cause rather than with preserving the truths on which their cause was founded. Like scared and immature soldiers, their fingers were always on the trigger and they were ready to fire, at times, as Francis Schaeffer points out, “treat[ing] the liberals as less than human.”

The “line in the sand” and the “great gulf fixed” attitude was fine when it addressed the liberal theology. The issue was clear. But it left many on the outside who, with a little patience, could have been brought along. While defending the truth, many of the leaders of fundamentalism failed to convince the undecided, to strengthen the weaker brother, and as a result many were abandoned to the “mercy” of the Liberals.

This “war psychology” became the hallmark of fundamentalism, and contempt and rhetoric often became the mood and method of dealing with opposition. At times the “war psychology” was so intense that the fundamentalists had no scruples drawing the sword on their own Christian brothers. There was the “if-you’re-not-with-us-you’re-against-us” attitude, which often led to a shunning of those who left the movement or even of those who simply took a more moderate approach. By the 1940s fundamentalism was no longer a coalition of churches that defended the faith against liberalism, but a series of fundamentalist factions.

The clearly defined black and white of the liberal controversy had too easily carried over into the evangelical/fundamentalist church. Matters of indifference were held with dogmatism and many became shibboleths and points of division and separation. Francis Schaeffer, again, said there was a tendency to “become absolutists even in the lesser points of doctrine” and a failure to understand the difference between “believing in absolutes and having an absolutist attitude about everything.” Another historian said concerning T. T. Shields in Toronto that “every issue, whether a matter basic to his faith or a problem of administration, was a ‘test case.’ He viewed life as a series of ‘superlatives.’” In short, there was a profound inability to deal with differences of opinion.

The habits learned in the heat of the controversy were never tempered or refined. Schaeffer continues, “When major differences developed among themselves [the fundamentalists], they continued to treat each other badly.” The history of fundamentalism therefore is littered with division among the leaders (Jack Hyles, Bob Jones, Sr., John R. Rice, T. T. Shields, Ian Paisley, and Carl Macintyre to name a few).

Furthermore, when this continued war against the liberals (who were happily disengaged from it all) and the power-hungry infighting among the leadership was going on, the attention was distracted from the people who mattered: those in the pews who had followed their leaders and separated for the sake of the truth. These are the grass-roots of the church, the would-be “church of tomorrow,” and their leaders and pastors were so engaged in a continued “war on liberalism” that they could not or did not establish a substantial or effective teaching ministry.

It goes without saying that holiness in this atmosphere was not based on biblical principles nor displayed by love to the brethren as taught in the second great commandment. Holiness took on more of a pharisaical appearance that majored on particular practices but lacked principled and exegetical instruction. Worldliness was very often defined by the length of hair, amount of makeup, or style of dress, etc., and, in some quarters, a superstitious adherence to the King James Bible became the measure of one’s spiritual experience.

Defense of the objective faith and a few selective external observances became the hallmark of Christianity and in this atmosphere—a breeding-ground for spiritual pride—externals were often more important than personal growth in grace. There was an impatience of letting people grow slowly and individually. While holding tenaciously to the truth, these hyper-fundamentalists forgot to hold the truth in love, and for many on the outside, this hardline, dismissive, and abrasive attitude became the face of Christianity.

For the past number of years I have been working on a biography of one of the earliest fundamentalist leaders in Canada, Dr. J. B. Rowell. Rowell was involved in the very first official church split in North America in the fundamentalist/liberal controversy. It happened in Vancouver in June 1927. The next month Rowell was preparing to plant a church for the new denomination in Victoria. The interesting thing about Rowell, who died in 1973, was that, although a separatist, he never adopted the “war psychology” that many of his counterparts did.

In 1930 Rowell wrote an article for his local church magazine, The Advent Evangel, entitled “Fundamental but Failing Fundamentally.” In that article Rowell chastised those who held to the fundamentals but did not live the fundamentals in holiness of life and in love for the brethren. He began the article like this:

Rowell developed the thought by saying that a fundamental of Christianity is “love.” He writes, “Under the old covenant and under the new we have the statements: “love covereth” (Prov. 10:12; 1 Peter 4:8).” According to Rowell if we don’t live fundamentally correct, no matter how fundamental we are, this lack of holiness and brotherly love will “sap the life from your soul and undermine the foundations of your faith, and then drive you into the wilderness of this world barren and desolate.” For many associated with fundamentalism these words were prophetic! 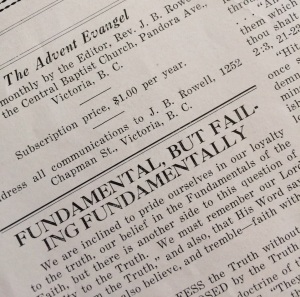 The fundamentalists did not have an equal balance between orthodoxy (purity of doctrine), orthopraxy (correct practice), and what John Stackhouse called orthopathy (right affections). Fundamentalism became a very cold, and at times, oppressive, place to be. A hard, judgmental, and disapproving spirit developed and the movement became indifferent to felt needs of the individual and very often the culture around it.

This is where many are today. For them, the wheels have come off the fundamentalist bus. Many have been left injured and scarred by the experience. Others have jumped off the bus with the sense of relief that they have escaped the clutches of a cult. Many feel a sense of shame and embarrassment associated with these excesses; they are struggling to correct old prejudices, mend the damage caused by harshness, and overcome the stigma of the movement to find their place in the church of Christ outside the fundamentalist sub-culture.